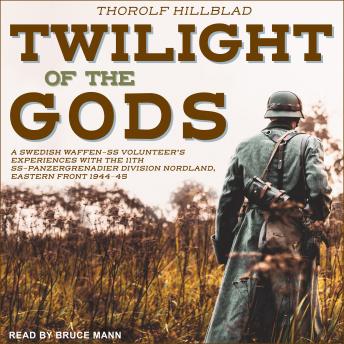 Twilight of the Gods was originally written in Swedish, and published in Buenos Aires shortly after the end of WWII. Erik Wallin, a Swedish soldier who volunteered for service with the Waffen-SS, participated in the climactic battles on the Eastern Front during late 1944 and 1945, later telling his story to this book's editor, Thorolf Hillblad.

Wallin served with the Panzer Reconnaissance Battalion, 11th SS-Panzergrenadier Division Nordland, a unit composed mainly of non-German volunteers, including Danes, Norwegians, and Swedes. The division enjoyed a high reputation for its combat capability, and was always at the focal points of the fighting on the Eastern Front in the last year of the war. During this period it saw combat in the Baltic, in Pomerania, on the Oder, and finally in defense of Berlin, where it was destroyed.

Erik Wallin served with his unit in all of these locations, and provides the listener with a fascinating glimpse into these final battles. The book is written with a 'no holds barred' approach which will captivate, excite, and maybe even shock the listener-his recollections do not evade the brutality of fighting against the advancing Red Army. Twilight of the Gods is destined to become a classic memoir of the Second World War.