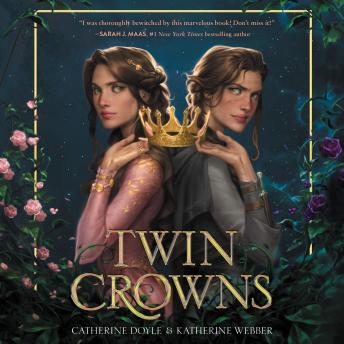 A high-stakes fantasy rom-com about twin princesses separated at birth—one raised as the crown princess, and the other taken as an infant and raised to kidnap her sister, steal the crown, and avenge the parents' murders—the first novel in a new YA duology from bestselling UK authors Catherine Doyle and Katherine Webber. Perfect for fans of The Selection, My Lady Jane, and Caraval.

Wren Greenrock has always known that one day she’d steal her sister’s place on the throne. Trained from birth to return to the palace and avenge her parents’ murder, she’ll do anything to become queen and protect the community of witches who raised her. Or she would, if only a certain guard wasn’t quite so distractingly attractive, and if her reckless magic would stop causing trouble. . . .

Princess Rose Valhart knows that with power comes responsibility—and she won’t let a small matter like waking up in the desert with an extremely impertinent (and very handsome) kidnapper get in the way of her duty. But life outside the palace is wilder and more beautiful than she ever imagined, and the witches she has long feared might turn out to be the family she never had.

But as coronation day looms and each sister strives to claim her birthright, an old enemy becomes increasingly determined that neither will succeed. Who will ultimately rise to power and wear the crown?

This title is due for release on May 17, 2022
We'll send you an email as soon as it is available!