Two for the Dough: A Stephanie Plum Novel 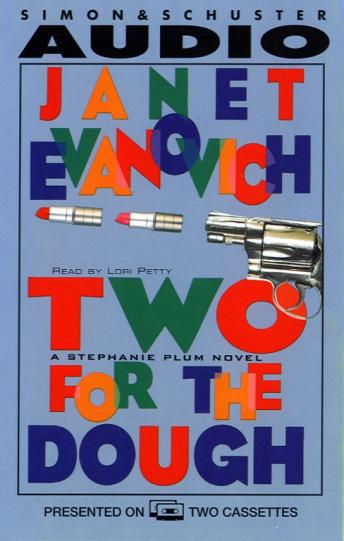 It's the return of Stephanie Plum, New Jersey’s “fugitive apprehension” agent (a.k.a. bounty hunter), introduced to us in the award-winning and bestselling novel One for the Money.

Now Stephanie's back, armed with attitude—not to mention stun guns, defense sprays, killer flashlights, and her trusty .38, Stephanie is after a new bail jumper, Kenny Mancuso, a boy from Trenton’s burg. He’s fresh out of the army, suspiciously wealthy, and he’s just shot his best friend.

With her bounty hunter pal Ranger stepping in occasionally to advise her, Stephanie staggers knee-deep in corpses and caskets as she traipses through back streets, dark alleys, and funeral parlors.

And nobody knows funeral parlors better than Stephanie's irrepressible Grandma Mazur, a lady whose favorite pastime is grabbing a front-row seat at a neighborhood wake. So, Stephanie uses Grandma as a cover to follow leads, but loses control when Grandma warms to the action, packing a cool pistol. Much to the family’s chagrin, Stephanie and Granny may soon have the elusive Kenny in their sights.

Fast-talking, slow-handed vice cop Joe Morelli joins in the case, since the prey happens to be his young cousin. And if the assignment calls for an automobile stakeout for two with the woman who puts his libido in overdrive, Morelli’s not one to object.

Low on expertise but learning fast, high on resilience, and despite the help she gets from friends and relatives, Stephanie eventually must face the danger alone when embalmed body parts begin to arrive on her doorstep and she’s targeted for a nasty death by the most loathsome adversary she's ever encountered. Another case like this and she'll be a real pro.

Two for the Dough: A Stephanie Plum Novel

This title is due for release on February 1, 1996
We'll send you an email as soon as it is available!