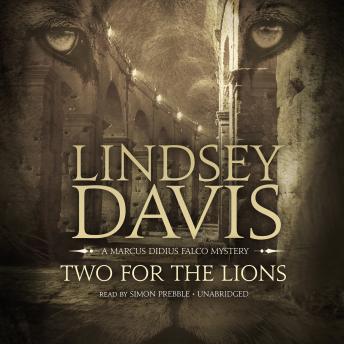 Two for the Lions: A Marcus Didius Falco Mystery

#10 of The Marcus Didius Falco Mysteries

This tenth novel featuring Marcus Didius Falco puts the tough private eye in the lions’ den to investigate an extraordinary case of murder.

Nothing’s certain except death and taxes. Catching tax evaders for the Emperor Vespasian looks like a plum position for Marcus Didius Falco, who has teamed up with his old boss, Anacrites, the crotchety chief spy of Rome. Soon, however, Falco is bogged down in bureaucracy, stuck at his stylus, and longing for a good murder to investigate.

He gets one when someone kills the lion Leonidas, the Empire’s official executioner. Feared by plebeians and citizens alike, Leonidas administered justice with a swift, sure blow. Then he ate the offender. Now this king of beasts lies stabbed to death in his cage.

Sniffing around for clues, Falco is soon led into the rowdy, decadent world of gladiators and bestiarii, fighters who specialize in contests against animals. Falco finds that it’s dark and dangerous in the tunnels under the arena—and even blacker in the desperate souls of those who must kill or be killed each time the games begin. Yet no one has a motive for slaughtering a lion after hours.

The unexpected slaying of the most glamorous gladiator in the city is another matter.

Now Falco has a high-profile crime to handle—and a domestic crisis brewing. His lover, the patrician Helena, reports that her disgraced brother needs help in Tripoli. Since Africa may well be the missing link between the murders of man and beast, Falco is quickly en route to those far shores … and heading toward a dangerous rendezvous with the raging lions that reside in the human heart, and one particular person who stalks his fellow man.