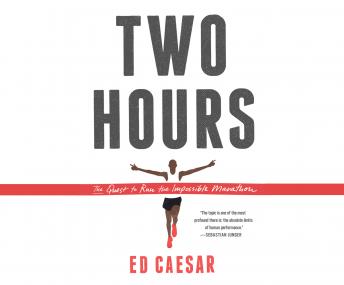 Two hours, to cover 26 miles and 385 yards. Its running's Everest, a feat once seen as impossible for the human body. Now we can glimpse the mountaintop. The sub-two hour marathon requires an exceptional feat of speed, mental strength, and endurance. The pioneer will have to endure more, live braver, plan better, and be luckier than any who has run before. Ed Caesar takes us into the world of elite runners: the greatest marathoners on earth. From big-money races in the United States to remote villages in Kenya, Two Hours is a book about a beautiful sport, that few people understand. It's about talent, heroism, and refusing to accept defeat. It's a book about running that is about much more than running... it's a human drama like no other.

“You might think, at first, that you’re going for a very long morning run with a small African man through the streets of Berlin. Before you know it, you're chasing the white whale of human endurance - the two-hour marathon - down every one of its psychological, physiological, geographical, historical, and cultural side streets, running with a tailwind that only great narrative craftsmen like Ed Caesar can exhale."

“A fascinating insight into the clockwork of what it means to be an elite athlete, always pushing at the edge of possibility. Like a good runner, Caesar carries the story along with grace and ease and generosity. He brings us to Kenya, New York, London, and Berlin, but ultimately allows us to look inside ourselves. It's the human story that shines through.

"Ed Caesar's treatment of the near-mythical two-hour marathon is both implacably scientific and wonderfully reverential. As a former marathoner I deeply appreciate both. The prose hums along effortlessly and the topic is one of the most profound there is: the absolute limits of human performance. Reading a book that combines those two things is one of the great pleasures in life."