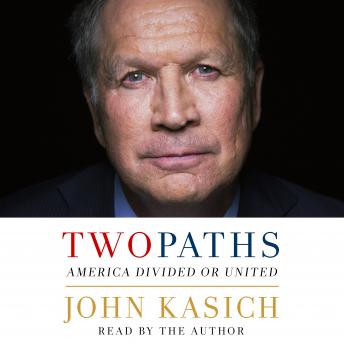 This program is read by the author.
When former Ohio governor John Kasich ran for president, his powerful message of hope and togetherness struck a chord with American voters. In Two Paths: America Divided or United, he carries that message forward by reflecting on the tumultuous 2016 campaign, sharing his concerns for America and his hopes for our future, and sounding a clarion call to reason and purpose, humility and dignity, righteousness and calm.
"The country never looked so grand and magnificent as it did from ten thousand feet," he writes of his time on the campaign trail, "and it was always a thrilling, faith-affirming thing to look out our window and see the sun splashing across Bryce Canyon in Utah, or the lights of the New York skyline at night as we flew past the Statue of Liberty, or an open field in the heartland that ran as far as our eyes could see.... I'd look out and think what an honor it would be to lead this great nation, what a blessing."
To be sure, the full story of the 2016 Presidential race will be written over time, but to understand what it was to be on the front lines of one of the most divisive and corrosive campaign battlegrounds in history, listeners won't find a richer, more thoughtful firsthand account than this one-a frank, refreshing assessment of the American dynamic and a clear path we might follow toward a more promising tomorrow.
As former governor Kasich reminds us in these pages, America is great because America is good-and because Americans have stayed true to who we are: one nation, under God, indivisible.