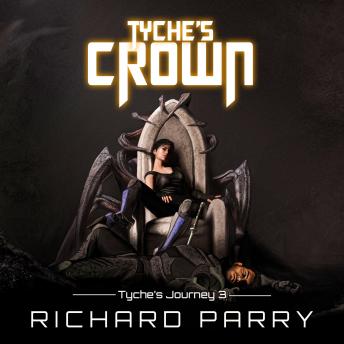 Our empire is built on lies.

The Senate is in chaos. The Republic is falling from within, a corrupted shell around a rotted core. Abhorrent espers control humans like pawns. The Republic Navy is in open rebellion. The Tyche rides solar wind, seeking allies. If they don’t find them, humanity will fall.

An ancient transmission is discovered from beyond the charted edge of the hard black. It is not Ezeroc, who need no technology to communicate. Grace Gushiken and Nathan Chevell take the free trader Tyche on a desperate mission. Find the source of the signal, and with it, hope. The war against the Ezeroc is not one humans can win alone.

Flying on borrowed time, Grace and Nate discover an ancient space station. It holds horrors from the Old Empire. These secrets are better left hidden, for they lead the Tyche to the heart of Ezeroc space. They find an alien homeworld hungry for war.

With the Ezeroc menace poised for victory, will Grace and Nate be able to save humanity? Or will their luck finally give out?

Tyche’s Crown is the third instalment in Richard Parry’s gripping Ezeroc Wars series. If you like page-turning space opera with great dialogue and heart-pumping action, get your copy today!