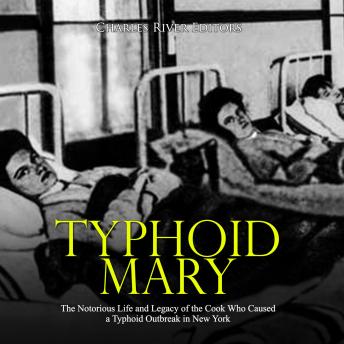 Typhoid Mary: The Notorious Life and Legacy of the Cook Who Caused a Typhoid Outbreak in New York

Outbreaks of disease, much like wars, inevitably produce a series of public figures who serve as emblematic heroes or villains of the era and event, and in the case of Mary Mallon, now known around the world as “Typhoid Mary,” only a few deaths and a relatively small group of infections actually occurred before she was arrested. That her small but deadly outbreak incited such a firestorm among New York’s health agencies was certainly driven by the fact that the “ghetto disease” had suddenly appeared in New York City’s wealthy neighborhoods. A further difficulty lay in the late discovery of a few individuals who were not susceptible to the disease of typhoid itself, but who were nevertheless carriers. Invisible but contagious, these rare cases spread the pathogen both prolifically and unwittingly. As a natural social conflict rose, public debate came to the fore over the civil rights of those apprehended for carrying major diseases.

The phenomenon of a carrier immune to typhoid and other afflictions had been noted by the early 19th century and can be found in the journals of obscure researchers. However, even prominent medical practitioners were generally unaware of ever having observed such an individual, and the chances are slim that an uneducated domestic servant from a rural county in Ireland would encounter the research or possess the knowledge with which to identify the carrier. In fact, in a state of disbelief maintained throughout her adult life, Mallon defied the medical community’s depiction of her as infected at all. Originating in a culture where disease was still believed to be the result of noxious vapors, and where one was not sick unless she appeared so, Mallon viewed the entire investigation as pure persecution. Along the way, she did herself little good with an aggressive, explosive temper, and a general belligerence toward any idea of cooperation with medical personnel whom she took to be frauds.

Typhoid Mary: The Notorious Life and Legacy of the Cook Who Caused a Typhoid Outbreak in New York

This title is due for release on May 23, 2020
We'll send you an email as soon as it is available!