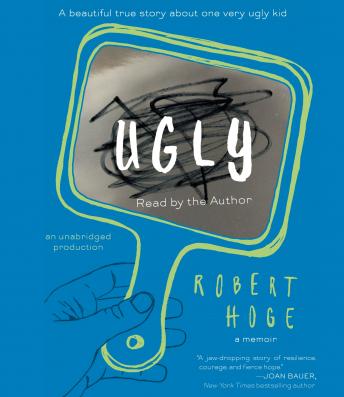 Ugly: A Beautiful True Story about One Very Ugly Kid

A funny, moving, and true story of an ordinary boy with an extraordinary face that's perfect for fans of Wonder—now available in the U.S.

When Robert Hoge was born, he had a tumor the size of a tennis ball in the middle of his face and short, twisted legs. Surgeons removed the tumor and made him a new nose from one of his toes.  Amazingly, he survived—with a face that would never be the same.

Strangers stared at him. Kids called him names, and adults could be cruel, too. Everybody seemed to agree that he was “ugly.” But Robert refused to let his face define him. He played pranks, got into trouble, had adventures with his big family, and finally found a sport that was perfect for him to play. And Robert came face to face with the biggest decision of his life, he followed his heart.

This poignant memoir about overcoming bullying and thriving with disabilities shows that what makes us “ugly” also makes us who we are. It features a reflective foil cover and black-and-white illustrations throughout.

Ugly: A Beautiful True Story about One Very Ugly Kid