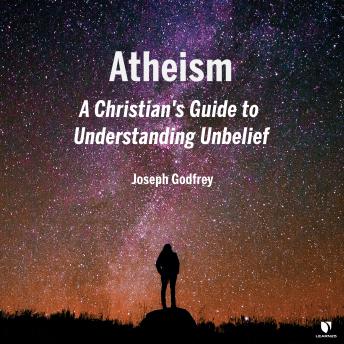 For much of Western history, belief in God was taken for granted. As society has grown more secular, however, people have increasingly expressed disbelief in God. Today, a quarter of Americans are religiously unaffiliated, many of whom identify as atheists and agnostics.

As the number of atheists has grown, so too have debates around the legitimacy of religion. Too often, these debates become embroiled in vitriol and personal attacks. And even those that take a more civil approach often focus on proving or disproving God's existence rather than fostering dialogue.

This audio course presents balanced ways for believers and non-believers to engage in thoughtful conversations with each other. Presented by Joseph Godfrey, a leading professor on the philosophy of religion, these lectures are both analytical and sensitive.

You will explore the different forms of atheism and scientific theories used to support the nonexistence of God. You'll also delve into classic texts by atheist (Nietzsche, Sartre, Marx) as well as insights about atheism from Christians like Aquinas, Karl Rahner, and John Hick.

As you grapple with the complex questions that arise from these thinkers and texts, you will gain a deeper understanding of evidential arguments against God while also considering how such evidence does not necessarily block paths to belief.