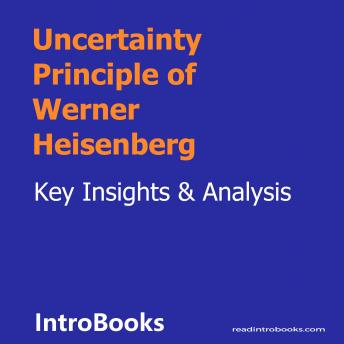 Quantum mechanics is widely considered to be the scientific theory that is one's best choice for the fundamental and universal explanation of the physical world. The conceptual structure used in this theory varies dramatically from that of classical physics. After all, the transition from classical to quantum physics is a true revolution in people's understanding of the physical universe.

One striking feature of the distinction between classical and quantum physics is that while classical mechanics assumes that precise simultaneous values can be assigned to all physical quantities, quantum mechanics, on the other hand, rejects this possibility, the classic example being the momentum and position of a particle.

As per quantum mechanics, the more exactly the position (momentum) of a particle is specified, the less clearly one can tell what its momentum (position) is. It's the concept (both preliminary and simplistic) of quantum mechanical instability for position and momentum.

The theory of uncertainty has played a distinguished role in many discussions on the philosophical impacts of quantum mechanics, in general during discussions on the accuracy of the so-called Copenhagen Interpretation, an interpretation supported by the founding fathers of the subject theory viz., Heisenberg and Bohr.