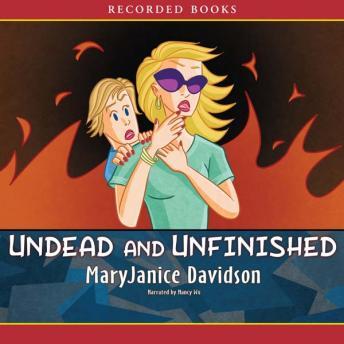 With their flashy style and offbeat humor, MaryJanice Davidson's Undead books have become regulars on the New York Times best-seller list. Ninth in the series, Undead and Unfinished finds Vampire Queen Betsy Taylor slogging her way through the Book of the Dead. Try as she might, Betsy isn't gleaning much. When Lucifer offers to give up all the book's secrets, Betsy is intrigued. But there's a catch, of course. For her part of the bargain, Betsy must take her big-hearted half-sister Laura to Hell so Laura can develop an appreciation for her dark heritage. After all, Laura is the Anti-Christ. It's rather inappropriate to have her volunteering at homeless shelters and running blood drives. Acclaimed narrator Nancy Wu delivers an entertaining performance, highlighting why critics and readers alike praise Davidson's unique blend of comedy, romance, and the supernatural. The entire Undead series is available from Recorded Books, starting with the book that began the phenomenon, Undead and Unwed.