Under the Diehard Brand 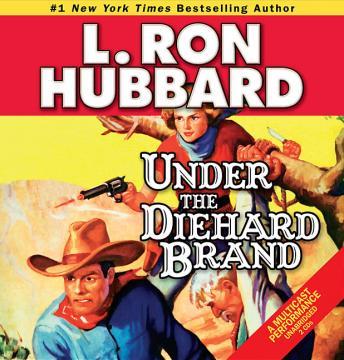 In the classic western movie The Searchers Jeffrey Hunter plays a young man with a mission in his heart and a chip on his shoulder. The character might well have been modeled on eighteen-year-old Lee Thompson, a trail-hand on a mission of his own-to save his dad, Diehard Thompson, the aging sheriff of Wolf River, Montana.

Old Diehard’s lost control of his town, and it seems every outcast and outlaw west of the Mississippi is on the prowl in Wolf River. Now Lee’s come all the way from Texas to stand up for his father, a man who hasn’t seen him since he was a boy and who doesn’t know him from Adam.

Lee’s plan is a dangerous one-mix in with the desperadoes and risk death at their hand Under the Diehard Brand. But sometimes, the only way to restore the rule of law is to break it.

Most of the Westerns published in the all-fiction magazines of the first half of the twentieth century were written by authors more familiar with the streets of New York than the cattle trails of Texas. Hubbard bucked the trend, and in the process changed the face of the Western adventure. He grew up in a time and a place where the Old West, though fading, still lived. His unique knowledge of the frontier, of its ways and its people, made him an authentic voice of this unique American experience.

Also includes the Western adventures, Hoss Tamer, in which a circus horse trainer turned bronco buster has to figure a way to tame a gang of outlaws, and The Ghost Town Gun Ghost, the story of an old prospector who seems to have lost his wits; but is he crazy . . . or crazy like a fox?

"From the musical introduction to the final credits, these full-cast, sound effects-laden productions will engage listeners of all ages, particularly fans of old-time radio, Westerns, genre fiction, action and adventure, and full-cast performances." -Library Journal

Under the Diehard Brand