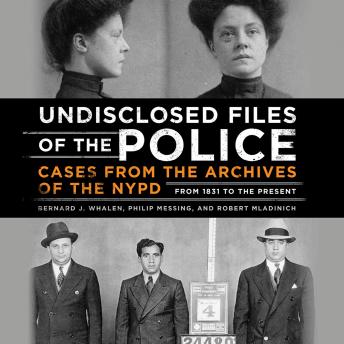 Undisclosed Files of the Police: Cases from the Archives of the NYPD from 1831 to the Present

More than 175 years of true crimes culled from the city's police blotter, told through startling, rarely seen images and insightful text by two NYPD officers and a NYC crime reporter.
From atrocities that occurred before the establishment of New York's police force in 1845 through the terrorist attack on the World Trade Center in 2001 to the present day, this visual history is an insider's look at more than 80 real-life crimes that shocked the nation, from arson to gangland murders, robberies, serial killers, bombings, and kidnappings, including: Architect Stanford White's fatal shooting at Madison Square Garden over his deflowering of a teenage chorus girl.The anarchist bombing of Wall Street in 1920, which killed 39 people and injured hundreds more with flying shrapnel.The 1928 hit at the Park Sheraton Hotel on mobster Arnold Rothstein, who died refusing to name his shooter. Kitty Genovese's 1964 senseless stabbing, famously witnessed by dozen of bystanders who did not intervene. Son of Sam, a serial killer who eluded police for months while terrorizing the city, was finally apprehended through a simple parking ticket.Perfect for crime buffs, urban historians, and fans of Serial and Making of a Murderer, this riveting collection details New York's most startling and unsettling crimes through behind-the-scenes analysis of investigations and more than 500 revealing photographs.

Undisclosed Files of the Police: Cases from the Archives of the NYPD from 1831 to the Present