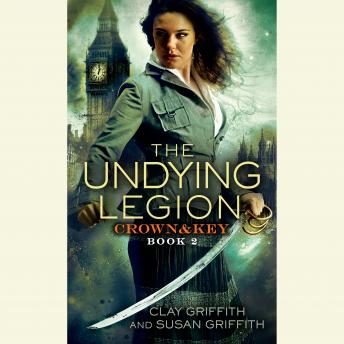 With a flood of dark magic about to engulf Victorian London, can a handful of heroes vanquish a legion of the undead?

When monster-hunter Malcolm MacFarlane comes across the gruesome aftermath of a ritual murder in a London church, he enlists the help of magician-scribe Simon Archer and alchemist extraordinaire Kate Anstruther. Studying the macabre scene, they struggle to understand obscure clues in the ancient Egyptian hieroglyphics carved into the victim’s heart—as well as bizarre mystical allusions to the romantic poetry of William Blake. One thing is clear: Some very potent black magic is at work.

But this human sacrifice is only the first in a series of ritualized slayings. Desperate to save lives while there is still time, Simon, Kate, and Malcolm—along with gadget geek Penny Carter and Charlotte, an adolescent werewolf—track down a necromancer who is reanimating the deceased. As the team battles an unrelenting army of undead, a powerful Egyptian mummy, and serpentine demons, the necromancer proves an elusive quarry. And when the true purpose of the ritual is revealed, the gifted allies must confront a destructive force that is positively apocalyptic.

Praise for The Undying Legion

“An impressive follow-up in the Crown & Key trilogy.”—Bibliophage

“A delightful read! . . . The Undying Legion combines a thrilling well-developed plot with spectacular action sequences, witty banter, and unlikely heroes that are fabulously unique and fascinating.”—Goldilox and the Three Weres

“Once I started reading, I couldn’t put it down. . . . This book was fantastic.”—Word Gurgle

Praise for Clay and Susan Griffith’s The Shadow Revolution

“A fast-paced, action-filled dark fantasy that is just sheer fun to read . . . The Shadow Revolution kicks off the Crown & Key series in spectacular fashion!”—Fresh Fiction

'A thrilling read! Clay and Susan Griffith have crafted a gritty, action-packed Victorian-era fantasy world full of dark creatures, mystery, and magic—a must read for steampunk fans!”—Shawntelle Madison, author of the Coveted series