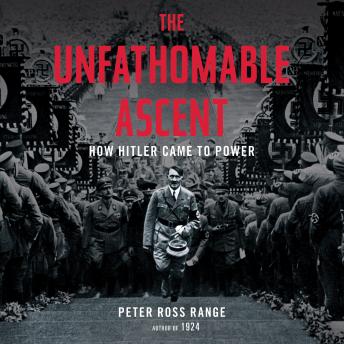 The Unfathomable Ascent: How Hitler Came to Power

The chilling and little-known story of Adolf Hitler's eight-year march to the pinnacle of German politics.
On the night of January 30, 1933, Adolf Hitler leaned out of a spotlit window of the Reich chancellery in Berlin, bursting with joy. The moment seemed unbelievable, even to Hitler. After an improbable political journey that came close to faltering on many occasions, his march to power had finally succeeded.

While the path of Hitler's rise has been told in books covering larger portions of his life, no previous work has focused solely on his eight-year climb to rule: 1925-1933. Renowned author Peter Ross Range brings this period back to startling life with a narrative history that describes brushes with power, quests for revenge, nonstop electioneering, American-style campaign tactics, and-for Hitler-moments of gloating triumph followed by abject humiliation.

Indeed, this is the tale of a high-school dropout's climb from the infamy of a failed coup to the highest office in Europe's largest country. It is a saga of personal growth and lavish living, a melodrama rife with love affairs and even suicide attempts. But it is also the definitive account of Hitler's unrelenting struggle for control over his raucous movement, as he fought off challenges, built and bullied coalitions, quelled internecine feuds and neutralized his enemies-all culminating in the creation of the Third Reich and the western world's descent into darkness. One of the most dramatic and important stories in world history, Hitler's ascent spans Germany's wobbly recovery from World War I through years of growing prosperity and, finally, into crippling depression.