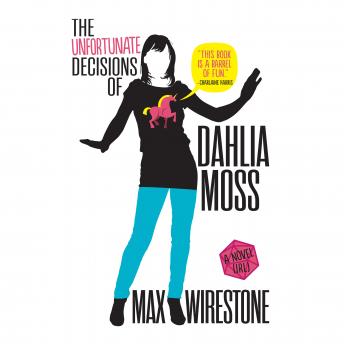 The Unfortunate Decisions of Dahlia Moss

#1 of A Dahlia Moss Mystery

Veronica Mars meets the World of Warcraft in The Unfortunate Decisions of Dahlia Moss, a mystery romp with a most unexpected heroine.

If it were up to me this book would be called Hilarious Things That Happened That Were Not At All Dahlia's Fault -- or HTTHTWNAADF, for short.
OK, I probably shouldn't have taken money from a mysterious eccentric to solve a theft, given that I'm not a detective, and that I am sometimes outwitted by puzzles in children's video games. I probably shouldn't have stolen bags of trash from a potential murder suspect. Arguably -- just arguably, mind you -- it may have been unwise to cos-play at an event where I was likely to be shot at.

But sometimes you just have to take some chances, right? And maybe things do get a little unfortunate. What of it? If you ask me, an unfortunate decision here or there can change your life. In a positive way, just so long you don't killed in the process. Admittedly, that's the tricky bit.