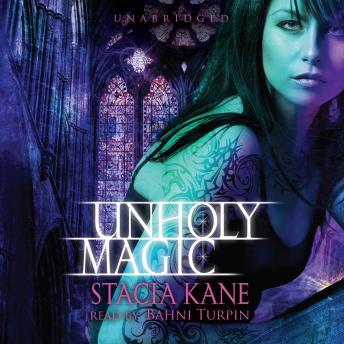 Enemies don't need to be alive to be deadly.
For Chess Putnam, finding herself near-fatally poisoned by a con psychic and then stopping a murderous ghost is just another day on the job. As an agent of the Church of Real Truth, Chess must expose those looking to profit from the world's unpleasant little poltergeist problem-humans filing false claims of hauntings-all while staving off any undead who really are looking for a kill. But Chess has been extra busy these days, coping with a new "celebrity" assignment while trying on her own time to help some desperate prostitutes. Someone's taking out the hookers of Downside in the most gruesome way, and Chess is sure the rumors that it's the work of a ghost are way off base. But proving herself right means walking in the path of a maniac, not to mention standing between the two men in her life just as they-along with their ruthless employers-are moving closer to a catastrophic showdown. Someone is dealing in murder, sex, and the supernatural, and once again Chess finds herself right in the crossfire.
Stacia Kane's Chess Putnam series, a.k.a. Downside Ghosts, is a cross between Ghostbusters, and Escape from New York, with black magic, greasers, drugs, human sacrifices, and a black 1969 Chevelle. This is the second in the series after Unholy Ghosts and again features Chess Putnam, a full-fledged, heavily tattooed witch.