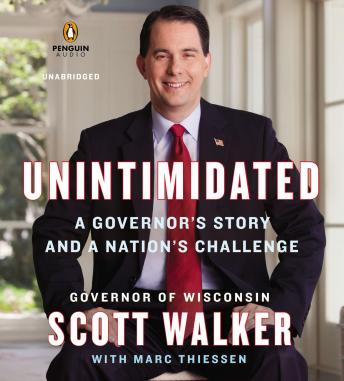 Unintimidated: A Governor's Story and a Nation's Challenge

In 2010, Scott Walker was elected governor of Wisconsin with a mandate to improve its economy and restore fiscal responsibility. With the state facing a $3.6 billion budget deficit, he proposed a series of reforms to limit the collective bargaining power of public employee unions, which was costing taxpayers billions in pension and health care costs.

The reaction was swift and severe. Angry protesters gathered outside the capitol, teacher unions accused him of sabotaging education, and the media descended on Wisconsin to make it a national controversy. Soon, liberals nationwide were denouncing Governor Walker.

He stood his ground despite relentless political and personal attacks with the help of supporters across the country who hailed him for having the courage to drive real change. In June 2012, he won a special recall election with a higher share of the vote than he had for his original election, becoming the first governor in the country to survive a recall election.

In this book, Governor Walker shows how his commitment to limited but effective government paid off. During his tenure Wisconsin has saved more than $1 billion, property taxes have gone down for the first time in twelve years, and the deficit was turned into a surplus. He also shows what his experiences can teach defenders of liberty across the country about standing up to the special interests that favor the status quo.

Unintimidated: A Governor's Story and a Nation's Challenge