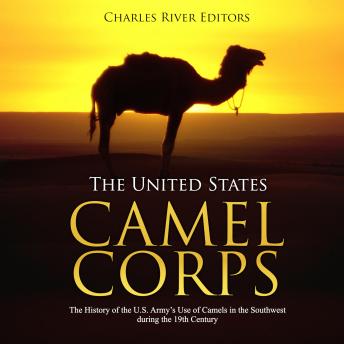 The United States Camel Corps: The History of the U.S. Army's Use of Camels in the Southwest during the 19th Century

In the 1850s, Americans widely believed that the area from the 97th Meridian to the Rocky Mountains was vast, sterile, and useless, fit only for wandering natives and something to be endured rather than enjoyed by the people traveling through. Putting the eastern border near the point where the Great Plains begin, a common name for the huge region was "The Great American Desert," and the acquisition of the Southwest from Mexico added to the already huge area, commonly considered desert wasteland. Suddenly, the United States had a million square miles of Great American Desert to administrate, an area where the resident native warriors considerably outnumbered the small U.S. Army.

In fact, the use of the word "desert" probably contributed to the idea behind using camels in the region, thanks to their reputation as "ships of the desert." With that in mind, the United States Camel Corps was a military experiment in the 1850s that brought camels from Egypt and Turkey to Texas and California. The cast of characters in this story is larger than life and includes U.S. Army and Navy officers, explorers, writers, politicians, and diplomats. The most important result of this historical footnote probably has no resonance in American history, and in fact, the name "United States Camel Corps" was never formalized, but it seems to be what historians call a retronym, a name given after a phenomenon has receded into the past. How long the name of "Camel Corps" has been in existence is unknown, but it has been used in literature for close to a century. What the troopers themselves called the unit remains unknown.

United States Camel Corps: The History of the U.S. Army's Use of Camels in the Southwest during the 19th Century