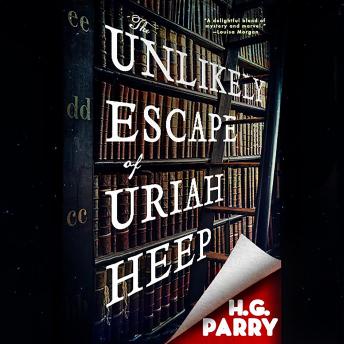 The Unlikely Escape of Uriah Heep: A Novel

The ultimate book-lover's fantasy, this sparkling debut is a 'delight of magic and literature, love and adventure' (Kat Howard) featuring a young scholar with the power to bring literary characters into the world.

For his entire life, Charley Sutherland has concealed a magical ability he can't quite control: He can bring characters from books into the real world.
But when literary characters start causing trouble throughout the city and threatening to destroying the world, he learns he's not the only one with his ability. Now it's up to Charley and his reluctant older brother, Rob, to stop them--hopefully before they reach The End.
Praise for The Unlikely Escape of Uriah Heep:
'A star-studded literary tour and a tangled mystery and a reflection on reading itself; it's a pure delight.' --Alix E. Harrow, Hugo Award-winning author
'This beautifully-written novel is an exploration of the power fiction wields -- the power to inform and to change, even to endanger, our everyday world.' --Louisa Morgan, author of A Secret History of Witches
'Equal parts sibling rivalry, crackling mystery, and Dickensian battle royale, it'll be one of your most fun reads this year.' --Mike Chen, author of Here and Now and Then