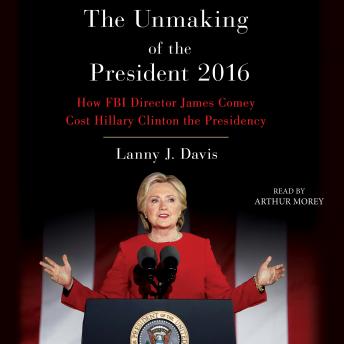 During the week of October 24, 2016, Hillary Clinton was decisively ahead of Donald Trump in most polls. Then FBI Director James Comey sent his infamous letter to Congress on October 28, saying the bureau was investigating additional emails, potentially relevant to the Hillary Clinton email case. In The Unmaking of the President 2016, attorney Lanny J. Davis shows how Comey’s misguided announcement—just eleven days before the election—swung a significant number of voters away from Clinton, winning Trump an Electoral College victory—and the presidency.

Despite so many other issues in the election—Trump’s behavior, the Russian hacking, Clinton's campaign missteps—after the October 28 Comey letter, everything changed. Now Davis proves with raw, indisputable data how Comey’s October letter cost Hillary Clinton the presidency and America turned the course of history in the blink of an eye.