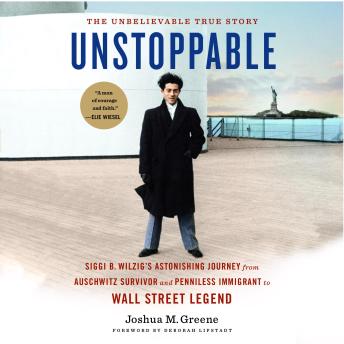 “A must-read that hopefully will be adapted for the screen. Greene lets Wilzig’s effervescent spirit shine through, and his story will appear to a wide variety of readers.” - Library Journal

Unstoppable is the ultimate immigrant story and an epic David-and-Goliath adventure. While American teens were socializing in ice cream parlors, Siggi was suffering beatings by Nazi hoodlums for being a Jew and was soon deported along with his family to the darkest place the world has ever known: Auschwitz. Siggi used his wits to stay alive, pretending to have trade skills the Nazis could exploit to run the camp. After two death marches and near starvation, he was liberated from camp Mauthausen and went to work for the US Army hunting Nazis, a service that earned him a visa to America. On arrival, he made three vows: to never go hungry again, to support the Jewish people, and to speak out against injustice. He earned his first dollar shoveling snow after a fierce blizzard. His next job was laboring in toxic sweatshops. From these humble beginnings, he became President, Chairman and CEO of a New York Stock Exchange-listed oil company and grew a full-service commercial bank to more than $4 billion in assets.

Siggi’s ascent from the darkest of yesterdays to the brightest of tomorrows holds sway over the imagination in this riveting narrative of grit, cunning, luck, and the determination to live life to the fullest.