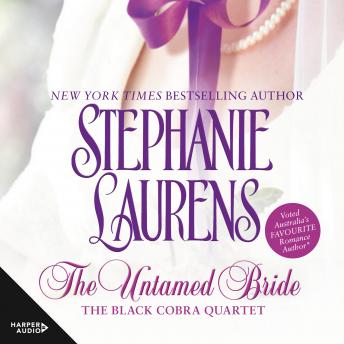 A Stephanie Laurens event! Stephanie launches a brand new series, The Black Cobra Quartet. Four officers of the Crown, aided by Bastion Club members and Cynsters alike, fight to bring down a dangerous enemy -- and to win the loves of their lives. they're battle-hardened, sinfully wealthy, completely unstoppable - and all male: four officers of the Crown, aided by Bastion Club members and Cynsters alike, fighting against a deadly foe known only as the Black Cobra. After an officer gives his life to protect vital evidence, his four closest friends race to England to finish his mission ...Colonel Derek Delborough feels nothing but relief when his ship finally docks in Southampton. But Del is still in danger - which makes the appearance of Miss Deliah Duncannon an unwelcome intrusion. Del wants nothing more than to get rid of the intriguing woman, but before he can press his case, she narrowly saves his life.Deliah knows she has gained the upper hand - but also become a target of Del's enemies. the two race to reach the safety of the Cynster country house, knowing that the growing passion between them could be a dangerous distraction. But the stolen moments are hard to resist ...