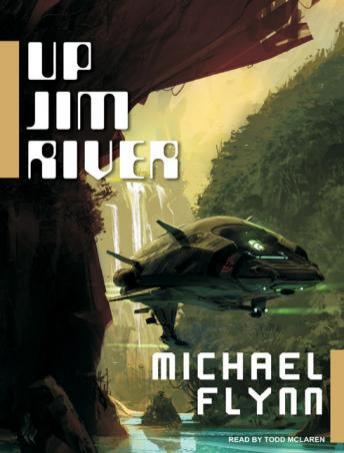 There is a river on Dangchao Waypoint, a small world out beyond Die Bold. It is a longish river as such things go, with a multitude of bayous and rapids and waterfalls, and it runs through many a strange and hostile country. Going up it, you can lose everything. Going up it, you can find anything.

The Hound Bridget ban has vanished, and her employer, the Kennel (the mysterious superspy agency of the League), has given up the search. But her daughter, the harper Mearana, has not. She enlists the scarred man, Donovan, to aid her in her search. With the reluctant assent and financial aid of the Kennel, they set forth. Bridget ban was following hints of an artifact that would 'protect the League from the Confederacy for aye.' Mearana is eager to follow that trail, but Donovan is reluctant, because whatever is at the end of it made a Hound disappear. What it would do to a harper and a drunk is far too easy to imagine.

Donovan's mind had been shattered by Those of Name, the rulers of the Confederacy, and no fewer than seven quarreling personalities now inhabit his skull. How can he hope to see Mearana through safely? Together, they follow Bridget ban's trail to the raw worlds of the frontier, edging ever closer to the uncivilized and barbarian planets of the Wild.

This title is due for release on April 26, 2010
We'll send you an email as soon as it is available!