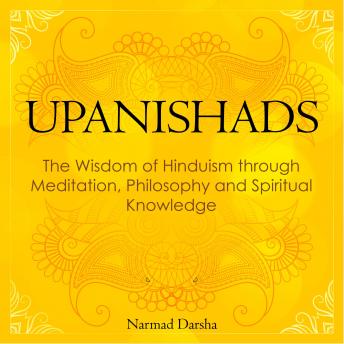 Upanishads: the Wisdom of Hinduism through Meditation, Philosophy and Spiritual Knowledge

Learn About Hinduism by Reading Its Most Important Texts - the Upanishads!

Have you always been interested in Hinduism but didn’t know where to start?

THE UPANISHADS ARE ANCIENT TEXTS EXPLAINING MEDIATIONS, PHILOSOPHY AND SPIRITUAL IDEAS OF HINDUISM.

The Vedas are the core scriptures of Hinduism. In Sanskrit, veda translates to knowledge. These texts offer exactly that - timeless, ancient knowledge and understanding of some of the highest ideas mankind has ever had.

The Upanishads represent the oldest and most revered part of the Vedas. They are the beating heart of Hinduism thought and practice. For centuries, these texts were memorized and passed through generations by oral transmission. They predate Buddhism and Christianity and fascinate both Western and Eastern modern philosophers.

TWO CENTRAL TOPICS COVERED BY THE UPANISHADS ARE CONCEPTS OF BRAHMAN AND ĀTMAN.

Brahman represents the all-pervasive fabric of our reality. It’s timeless, infinite and eternal, the truth that never changes but causes all change.

Ātman, on the other hand, signifies the inner self, what we call the soul. It’s the immortal essence of all living beings, humans, animals and trees.

SINCE THEY WERE TRANSLATED IN THE 19TH CENTURY, THE UPANISHADS HAVE FASCINATED AND IMPRESSED THE WESTERN MINDS. THERE’S NO SOURCE BETTER TO REVEAL THE WISDOM OF HINDUISM, ITS PHILOSOPHY AND SPIRITUAL PRACTICES.

Upanishads: the Wisdom of Hinduism through Meditation, Philosophy and Spiritual Knowledge