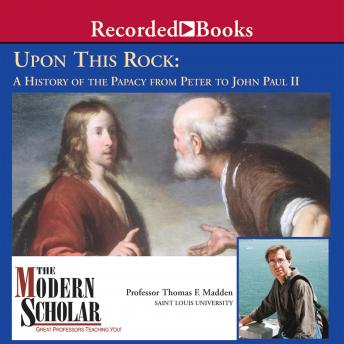 Upon This Rock: A History of the Papacy from Peter to John Paul II

In this compelling series of lectures, widely esteemed author and professor Thomas F. Madden illustrates how the papacy, the world's oldest institution, gave birth to the West. Since Jesus Christ instructed the foremost of his Apostles, Peter, that he would be the rock upon which Christ would build his church, the papacy has survived the rise and fall of empires while continuing to assert an undeniable influence on world events. The men who have served as pope are a fascinating collection of larger-than-life personages who have touched millions of lives, changed the course of history, and even launched crusades that have altered the balance of global politics. With a learned approach and incisive analysis, Professor Madden not only provides a history of the papacy, but sheds light on the personalities of the popes and the flavor of their pontificates; and at the same time, Madden demonstrates how the papacy has survived the tumultuous cauldron of history and offers a studied commentary on the future of this resilient institution.

Upon This Rock: A History of the Papacy from Peter to John Paul II