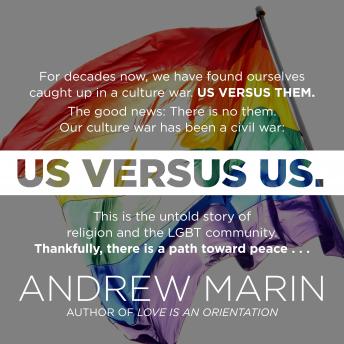 Us versus Us: The Untold Story of Religion and the LGBT Community

Would you believe that 86 percent of LGBT people-from the proud marcher at the Pride Parade to the quiet, closeted teen-spent their childhood in church? More than half of them left those religious communities as adults; three out of four would be happy to come back.

Andrew Marin brings the startling findings of his largest-ever scientific survey of the religious history, practices, and beliefs of the LGBT community. Marin's findings offer clear direction for both sides of a long cultural battle to meet in the middle, sacrificing neither conviction nor integrity as they rediscover the things they have in common and the hope found in Christ alone.

Us versus Us: The Untold Story of Religion and the LGBT Community