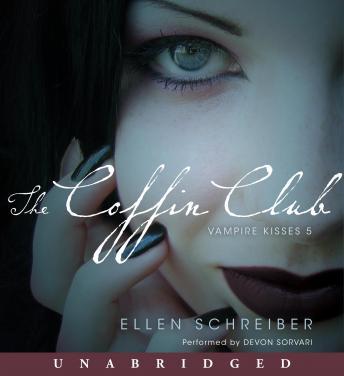 It's tough for love-struck Raven to imagine what's keeping her nocturnal boyfriend from returning to Dullsville. So there's only one thing to do—find Alexander. Along the way, Raven can't resist the spot where she feels most at home, the Coffin Club. But when she stumbles upon a secret door in the club, she descends into a dim catacomb—to a hidden hangout where the house drink happens to be type A or B. Drawn to one of its shadowy members, Raven suspects she's in over her head. But exploring the covert club is too tempting, even after coming face-to-face with Alexander's trouble-stirring enemy.

Can Raven delve further into the Underworld unbeknownst to Alexander—and also solve the mystery of her true love's own secrecy? Ellen Schreiber's sizzling Vampire Kisses series continues with its darkest installment yet.