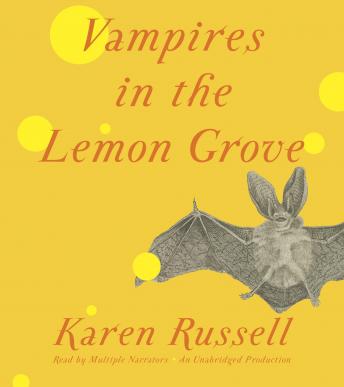 Vampires in the Lemon Grove: Stories

From the author of the instant New York Times best seller Swamplandia! (a finalist for the Pulitzer Prize), a dazzling new collection of stories that showcases Karen Russell's gifts at their inimitable best.

In the collection's marvelous title story, two aging vampires in a sun-drenched Italian lemon grove find their hundred-year marriage tested when one of them develops a fear of flying. In 'The Seagull Army Descends on Strong Beach, 1979,' a dejected teenager discovers that the universe is communicating with him through talismanic objects left in a seagull's nest. 'Proving Up' and 'The Graveless Doll of Eric Mutis'--stories of children left to fend for themselves in dire predicaments--find Russell veering into more sinister territory, and ultimately crossing the line into full-scale horror. In 'The New Veterans,' a massage therapist working with a tattooed war veteran discovers she has the power to heal by manipulating the images on his body. In all, these wondrous new pieces display a young writer of superlative originality and invention coming into the full range and scale of her powers.

List of Stories and Readers:
Vampires in the Lemon Grove read by Arthur Morey
Reeling for the Empire read by Joy Osmanski
The Seagull Army Descends on Strong Beach, 1979 read by Kaleo Griffith
Proving Up read by Jesse Bernstein
The Barn at the End of Our Term read  by Mark Bramhall
Dougbert Shackleton's Rules of Antarctic Tailgating read by Michael Bybee
The New Veterans read by Romy Rosemont
The Graveless Doll of Eric Mutis read by Robbie Daymond

Vampires in the Lemon Grove: Stories