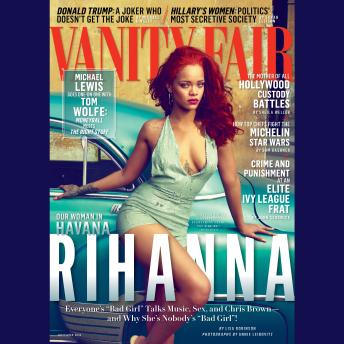 FREE EXTRA: Download the audio version of our November cover story on Rihanna.

Editor’s Letter: Graydon Carter’s introduction to the November issue Rihanna opens up about music, sex, and Chris Brown Inside Kelly Rutherford’s custody nightmare Michael Lewis on Tom Wolfe Why some chefs don’t want a Michelin star Plus: Patti Smith, Hillary Clinton, and much moreVanity Fair is a cultural filter, sparking the global conversation about the people and ideas that matter most. With a dedication to journalistic excellence and powerful storytelling, Vanity Fair is the first choice—often the only choice—for the world’s most influential and important audience. From print to social media, the big screen to the smartphone and now on audio, Vanity Fair is the arbiter of our era.