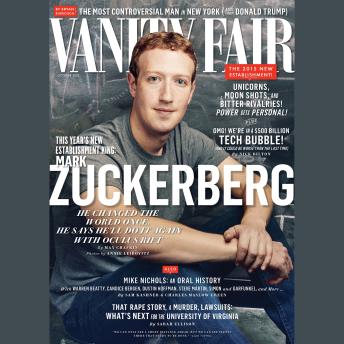 What it’s like to wear the RiftHow the investment stacks upWhat to expect for the future of virtual realityIn this issue:

Editor’s Letter: Graydon Carter’s introduction to the October issueMark Zuckerberg on how he’ll change the world a second timeThe 2015 New EstablishmentAn alumna on the University of Virginia’s next moveMike Nichols: An oral historyPlus: Melinda Gates, Bill de Blasio, and much more!Vanity Fair is a cultural filter, sparking the global conversation about the people and ideas that matter most. With a dedication to journalistic excellence and powerful storytelling, Vanity Fair is the first choice—often the only choice—for the world’s most influential and important audience. From print to social media, the big screen to the smartphone and now on audio, Vanity Fair is the arbiter of our era.