The Venetian Betrayal: A Novel 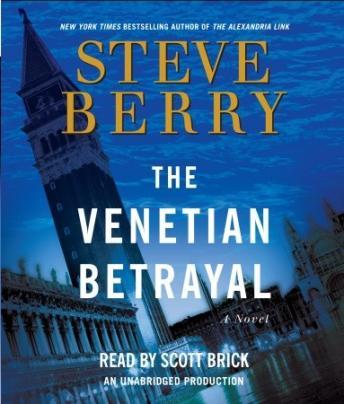 “[Steve Berry] has a genuine feel for the factual gaps that give history its tantalizing air of the unknown.”—The New York Times Book Review

After narrowly escaping incineration in a devastating fire that consumes a Danish museum, Cotton Malone—former Justice Department agent turned rare-book dealer—learns from his friend, the beguiling adventurer Cassiopeia Vitt, that the blaze was neither an accident nor an isolated incident. As part of a campaign of arson intended to mask a far more diabolical design, buildings across Europe are being devoured by infernos of unnatural strength. Born from the ashes is a new Eastern European nation whose ruthless leader will soon draw Cotton into an intense geopolitical chess game against a shadowy cabal of power brokers. The prize lies buried with the mummified remains of Alexander the Great—in a tomb lost to the ages for  more than two thousand years. Trekking from Denmark
to Venice to Central Asia, Cotton and Cassiopeia are determined to solve an ancient puzzle whose solution
could destroy or save millions of people—depending on who finds the lost tomb first.

“There’s nothing tastier than a globe-spanning mystery. . . . Berry’s books excel at bringing out fascinating tidbits of history.” —Richmond Times-Dispatch