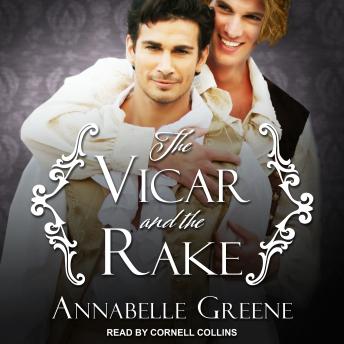 The Vicar and the Rake

As a young man, Sir Gabriel Winters left behind his status as a gentleman, turning his back on his secret desires and taking a self-imposed vow of celibacy. Now he's a chaste, hardworking vicar, and his reputation is beyond reproach. But, try as he might, he's never forgotten the man he once desired or the pain of being abandoned by his first love.

Edward Stanhope, the Duke of Caddonfell, is a notorious rake, delighting in scandal no matter the consequence. With a price on his head, he flees to the countryside, forced to keep his presence a secret or risk assassination. When Edward finds Gabriel on his estate, burning with fever, he cannot leave him to die, but taking him in puts them both in jeopardy.

With the help of a notorious blackmailer, a society of rich and famous gentlemen who prefer gentlemen, and a kitten named Buttons, they might just manage to save Edward's life-but the greatest threat may be to their hearts.

Vicar and the Rake