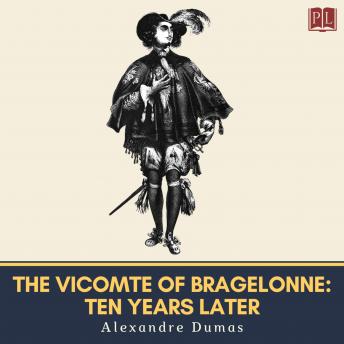 #3 of The D'Artagnan Romances

The Vicomte of Bragelonne: Ten Years Later (French: Le Vicomte de Bragelonne ou Dix ans plus tard) is a novel by Alexandre Dumas. It is the third and last of The d'Artagnan Romances, following The Three Musketeers and Twenty Years After. It appeared first in serial form between 1847 and 1850.
In the English translations, the chapters of this large volume are usually subdivided four individual books:
1. The Vicomte de Bragelonne
2. Ten Years Later
3. Louise de la Vallière
4. The Man in the Iron Mask
Set in the 1660s and concerned with the early reign of Louis XIV, the novel has been called an 'origins' story of the King, 'a tale about the education of a young man who went on to rule for over 70 years and become one of France's most beloved monarchs'. Naturally, in a novel about Dumas' musketeers, the characters play an important role in Louis' education.