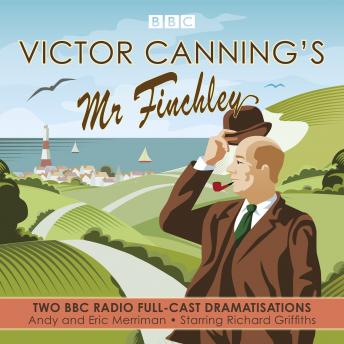 Edgar Finchley is middle-aged, unassuming and not in the habit of taking holidays – but in these two delightful dramatisations, he unexpectedly discovers the delights of travel as he crosses the Channel to the Continent and explores the English countryside.

Mr Finchley Goes to Paris finds our hero on his way to France to track down a rather irresponsible client. But before he sets off, he has an important question to put to a certain widow of his acquaintance… On arrival in Paris, he has a contretemps with a haddock, gains a guide, makes a move, visits a fair and gets caught up in a kidnapping – but is it a case of mistaken identity?

In Mr Finchley Takes the Road, he falls in love with a canary-coloured caravan and a rather stubborn horse, and heads off for a series of adventures touring 1930s Kent. Along the way, he meets an unlikely teller of salty tales, is captured by two gamekeepers and accused of poaching, visits an old haunt and goes on a crusade. But someone is following hot on his trail…

Dramatised by father-and-son team Eric Merriman (Beyond Our Ken) and Andy Merriman, these whimsical stories are narrated by James Villiers and star Richard Griffiths as Mr Finchley.