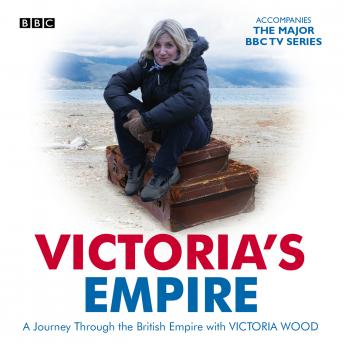 One of Britain’s most popular writers and comedians journeys through the British Empire - as seen on BBC TV. Victoria Wood was named after Queen Victoria. So who better to take us on a journey through the British Empire? The story of the Empire is a key part of the story of Queen Victoria’s reign and the Empire was the largest the world had ever known, covering a fifth of the earth’s surface and including a quarter of its population. Victoria’s mammoth journey takes in the beauty and splendour of Hong Kong, Borneo, Ghana, Jamaica, Newfoundland, New Zealand and Australia before she finishes at the Victoria Falls in Zambia. ‘Britain used to be top country. English was top language and pink was the colour on the maps. Now when people talk about it, the Empire’s an embarrassment, something slightly regrettable.’ With those thoughts, Victoria didn’t know what she would find, or what welcome she would get from those countries that have evolved since being colonised, and that was her journey: tip-toeing round the remnants of the Empire to all those places named after the grumpy-looking monarch who never went further than the Isle of Wight. 'Victoria’s Empire' is read by Victoria Wood and Russell Boulter and is a worldwide journey of a lifetime seen through the eyes of one of our most popular celebrities.