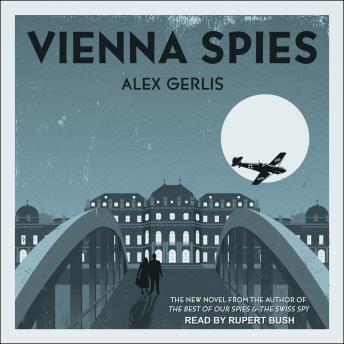 With the end of the Second World War in sight, the Allies begin to divide up the spoils and it proves to be a dangerous game. The British have become aware that, contrary to what's been agreed, the Soviet Union is intent on controlling Austria once the Second World War ends. And Major Edgar is given the job of establishing an espionage unit in Vienna. He sends in a married Swiss couple-Rolf Eder and Katharina Hoch-who, in fact, have only met each other a week before their journey. Their job is to track down Austria's most respected politician-in hiding from the Nazis-and bring him over to the British cause. But the feared Soviet spy Viktor Krasotkin is already in the wartorn city, embarking on exactly the same mission.

A taut, tense masterclass in espionage fiction from the author of The Best of Our Spies and The Swiss Spy, the new novel by Alex Gerlis takes place in a fiercely pro-Nazi city in the final months of the Second World War-a place where the Wehrmacht patrol the streets and the Gestapo rule unchecked. As the former Austrian capital faces the onslaught of the Allies from one side and the Red Army from the other, it provides an unforgettable backdrop to a chess-like game of oneupmanship and political ideology.