The View from Mount Joy 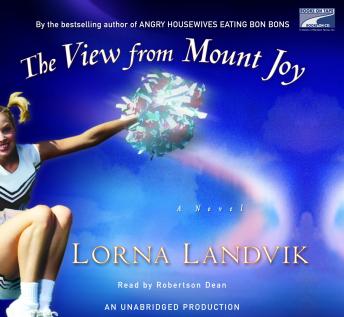 THE VIEW FROM MOUNT JOY, Lorna Landvik’s delightfully quirky and intensely moving new novel, is about the unexpected pleasures found in living a good life.

When hunky teenage hockey player Joe Andreson moves to Minneapolis, Joe falls under the seductive spell of Kristi Casey, Ole Bull High’s libidinous head cheerleader. Joe balances Kristi’s lustful manipulation with the down-to-earth companionship of his smart, platonic girlfriend, Darva. But it is Kristi who will prove to be a temptation throughout Joe’s life.

Years later, having once dreamed of a career in pro hockey or as a globetrotting journalist, Joe can’t believe that life has deposited him in the aisles of Haugland Foods. But he soon learns that being a grocer is like being the mayor of a small town. For Joe, everyday life is its own roller-coaster ride, and all he wants to do is hold on tight.

The path Kristi has charged down, on the other hand, is as wild as Joe’s is tame–or at least that’s how it appears. But who has really risked more? Who has lived more? And who is truly happy? As Joe discovers, sometimes people are lucky enough to be standing in the one place where the view of the world is breathtaking, if only they’ll open their eyes to all there is to see.