A Vigil of Spies 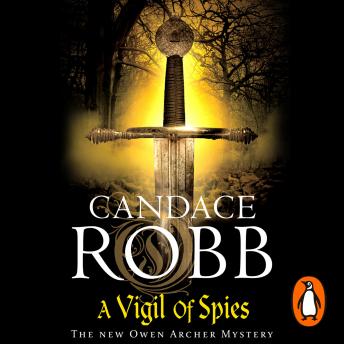 A CALLOUS MURDER. A DEVASTATING SECRET. A CRIME OF PASSION.

Bishopthorpe Palace, York. September 1373: John Thoresby, the Archbishop of York, lies dying. One of the most powerful men in the country, his imminent demise has the dominant families of the north vying to influence his succession.

Owen Archer, Thoresby's master of the guards, is one of the few men Thoresby trusts. He is determined to ensure that his lord's last days are as peaceful as possible, but his plans are thrown into disarray when Thoresby agrees to a visit from Joan, Princess of Wales, wife of the Black Prince and mother of the young heir to the throne of England. She has come to seek the great man's advice before it is too late.

Owen resolves to do his duty, but within minutes of Joan's arrival things go disastrously wrong when a member of the royal party is murdered. Then, only days later, a messenger carrying urgent letters for Thoresby is found hanging in the woods. Soon, the shadow of suspicion falls on the whole household. And as Owen races against time to find the murderer amongst them, he starts to realise that not only has one of his own men been compromised, but all their lives are now in danger...