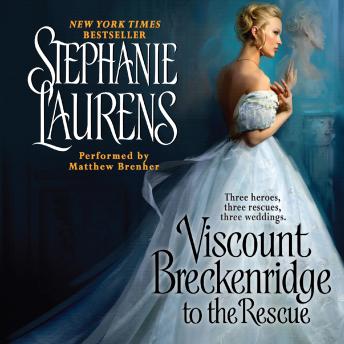 Viscount Breckenridge to the Rescue

The first in a stunning new series about the three youngest Cynster sisters ... and their search for their heroes. 'Sinfully sexy and deliciously irresistible' BOOKLIStHeather Cynster is looking for true love - determined to find the one who will sweep her off her feet into wedded bliss. Despairing of finding it in London's staid ballrooms, she steps out of her safe world and boldly attends a racy soiree.But her promising hunt is ruined by the supremely interfering timothy Danvers, Viscount Breckenridge, who whisks her out of scandal and, unwittingly, straight into danger. When Heather is seized by a mysterious figure and bundled into a coach, timothy follows them from London all the way to the wild and untamed Scottish highlands.As Heather and her would-be rescuer work together to bring her kidnapper to justice, she begins to realise that there's more to be gained than just her freedom. And it's up to the notorious Breckenridge to prove that he's the hero she's been searching for all along ...Step into a world filled with glamour and adventure with the first in a dazzling new series by Stephanie Laurens: the queen of historical romance

Viscount Breckenridge to the Rescue