Voices Of The Powerless The Complete Series 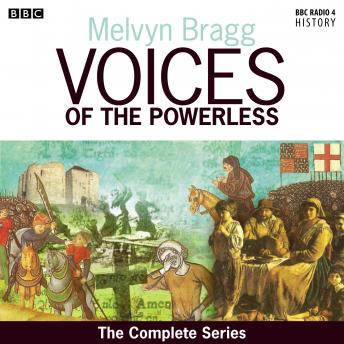 Melvyn Bragg follows his long historical exploration of the Routes of English with 'Voices of the Powerless', the BBC Radio 4 series in which he explores the lives of the ordinary working men and women of Britain at critical moments across the last 1,000 years. The Norman Conquest is his starting point, a time when William the Conqueror's 'harrying of the North' affected the poor apprentice, the lowly ploughman and the humble shepherd. He goes on to look at the Peasants' Revolt in 1381 (inspired by a hated Poll Tax) and the religious changes brought about by Henry VIII's Reformation. The so-called 'Plantation' of Ulster, the Siege of Chester, and the plague which ravaged Salisbury in 1627 are later stopping-off points in Bragg's journey, which also finds him traversing the country and speaking to historians and experts about the life of the ordinary citizen in each period. Next Melvyn visits urban Lancashire to explore the warp and weft of the Industrial Revolution to see how the upheavals of the new mechanisation affected workers who found their traditional trades marginalised by the growth of industrialization. After he travels to the historic dockyard of Chatham to explore the life of a seaman in Nelson's navy, he voyages to Tasmania to find out what a sentence of transportation to Van Diemen’s Land really meant to those who survived the journey 'beyond the seas'. As well as the Highland Clearances - still talked of as one of the harshest pieces of social manipulation in Britain's history - we travel to East Yorkshire to discover the little-known story of the Wolds Wagoners, a regiment drawn up by the local landlord from the men on his estate during World War One. Lastly, Melvyn Bragg visits Merthyr Tydfil to look at the plight of the miners in the Depression and how the disastrous effects of the Wall Street Crash, combined with industrial unrest, left towns like Merthyr Tydfil a mere shadow of its former self. First broadcast in 2002, this Complete Series contains all 12 episodes of Series One and Two: 'The Norman Conquest', 'The Peasants' Revolt', 'The Reformation', 'The Plantation of Ireland', 'The English Civil War', 'The Great Plague'; 'The Industrial Revolution', 'The Napoleonic Wars', 'The Colonisation of Australia', 'The Highland Clearances', 'The First World War' and 'Coal Mining and the Depression'. Guidance: due to the archive nature of the recording the sound quality may vary.

Voices Of The Powerless The Complete Series