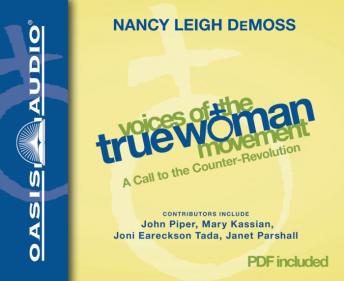 Voices of the True Woman Movement: A Call to the Counter-Revolution

Which voices are you listening to?  In a world with so many contradictory and insistent messages, it’s hard to know which ones are right, isn’t it? In recent decades, a powerful chorus has called out to women—urging us to choose the pathway of independence and self-reliance. Slick advertising and packaging have made the world’s offer, like the forbidden fruit in the Garden, appear to be “good... a delight to the eyes... [and] desired to make one wise.” In October 2008, over six thousand gathered for the first True Woman conference to hear God’s Word and to affirm His mission and purpose for their lives. Voices of the True Woman Movement is a collection of messages presented in that conference. As you listen, you’ll be inspired to listen to the voice of the One who crafted you to uniquely bear His image as a woman. Discover how a heart tuned to hear God’s voice can be transformed to glorify Him and impact those around you for such a time as this. 'Who knows whether you have come to the kingdom for such a time as this?' (Esther 4:14, NKJV)  Now is the time!

Voices of the True Woman Movement: A Call to the Counter-Revolution