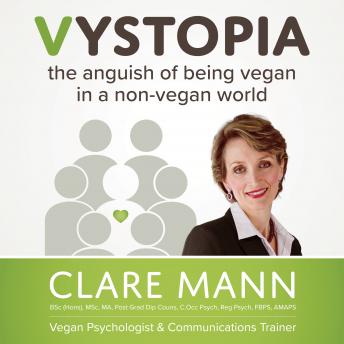 Vystopia: the anguish of being vegan in a non-vegan world

This book is the first of its kind to identify the existential crisis faced by vegans. Vystopia is the normal response any feeling human being should have after discovering the nature and extent of society's systematised animal abuse. It's fuelled by the trance-like collusion of non-vegans with a dystopian world they've not yet realised they're part of.

Bestselling author Clare Mann, a vegan psychologist, communications trainer and existential psychotherapist, not only validates the vegan's experience, but rejects medical labels which claim such anguish is abnormal. As a telling witness to vystopia - a term she coined in 2017 - she provides vegans with a language and toolbox to work through their anguish and unite with others to examine the biggest social justice challenge of our time: our relationship with the animal kingdom.

Vystopia: the anguish of being vegan in a non-vegan world

This title is due for release on October 14, 2018
We'll send you an email as soon as it is available!