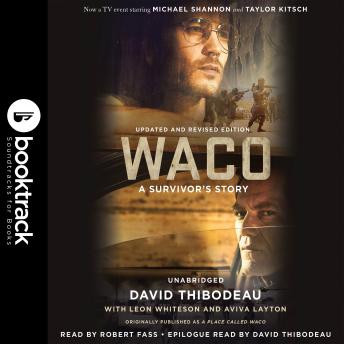 Waco: Booktrack Edition adds an immersive musical soundtrack to your audiobook listening experience! *
The basis of the celebrated Paramount Network miniseries starring Michael Shannon and Taylor Kitsch--Waco is the critically-acclaimed, first person account of the siege by Branch Davidian survivor, David Thibodeau.
Twenty-five years ago, the FBI staged a deadly raid on the Branch Davidian compound in Waco. Texas. David Thibodeau survived to tell the story.
When he first met the man who called himself David Koresh, David Thibodeau was a drummer in a local a rock band. Though he had never been religious in the slightest, Thibodeau gradually became a follower and moved to the Branch Davidian compound in Waco. He remained there until April 19, 1993, when the compound was stormed and burned to the ground after a 51-day standoff with government authorities.

In this compelling account--now with an updated epilogue that revisits remaining survivors--Thibodeau explores why so many people came to believe that Koresh was divinely inspired. We meet the men, women, and children of Mt. Carmel. We get inside the day-to-day life of the community. We also understand Thibodeau's brutally honest assessment of the United States government's actions. The result is a memoir that reads like a thriller, with each page taking us closer to the eventual inferno.
Originally published as A Place Called Waco.
*Booktrack is an immersive format that pairs traditional audiobook narration to complementary music. The tempo and rhythm of the score are in perfect harmony with the action and characters throughout the audiobook. Gently playing in the background, the music never overpowers or distracts from the narration, so listeners can enjoy every minute. When you purchase this Booktrack edition, you receive the exact narration as the traditional audiobook available, with the addition of music throughout.