The Wal-Mart Effect: How the World's Most Powerful Company Really Works--and How It's Transforming the American Economy 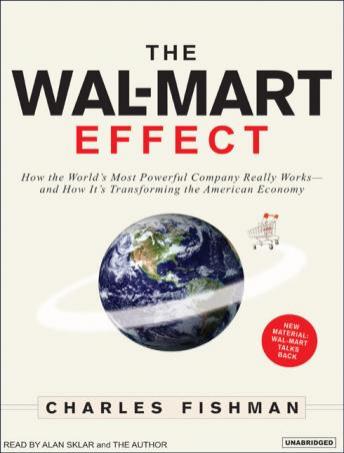 The Wal-Mart Effect: The overwhelming impact of the world's largest company-due to its relentless pursuit of low prices-on retailers and manufacturers, wages and jobs, the culture of shopping, the shape of our communities, and the environment; a global force of unprecedented nature. Wal-Mart is not only the world's largest company; it is also the largest company in the history of the world. Americans spend $26 million every hour at Wal-Mart, twenty-four hours of every day, every day of the year. Is the company a good thing or a bad thing? On the one hand, market guru Warren Buffett estimates that the company's low prices save American consumers $10 billion a year. On the other, the behemoth is the number-one employer in thirty-seven of the fifty states yet has never let a union in the door.

Though 70 percent of Americans now live within a fifteen-minute drive of a Wal-Mart store, we have not even begun to understand the true power of the company and the many ways it is shaping American life. We know about the lawsuits and the labor protests, but what we don't know is how profoundly the 'Wal-Mart effect' is shaping our lives.

Fast Company senior editor Charles Fishman takes us on an unprecedented behind-the-scenes investigative expedition deep inside the many worlds of Wal-Mart. He reveals the radical ways in which the company is transforming America's economy, our workforce, our communities, and our environment. Fishman penetrated the secrecy of Wal-Mart headquarters, interviewing twenty-five high-level former executives; he entered into the world of a host of Wal-Mart's suppliers to uncover how the company strong-arms even the most established brands; and journeyed to the ports and factories, the fields and forests where Wal-Mart's power is warping the very structure of the world's market for goods. Wal-Mart is not just a retailer anymore, Fishman argues. It has become a kind of economic ecosystem, and anyone who wants to understand the forces shaping our world today must understand the company's hidden reach.

Wal-Mart Effect: How the World's Most Powerful Company Really Works--and How It's Transforming the American Economy

This title is due for release on February 15, 2006
We'll send you an email as soon as it is available!