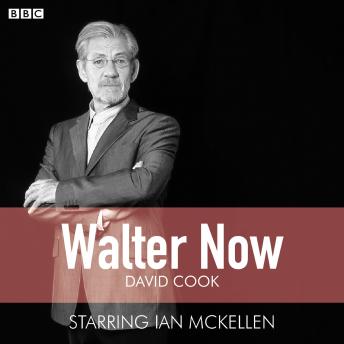 A BBC Radio 4 full-cast dramatisation starring Sir Ian McKellen, written by David Cook as follow-up to his 1982 Channel 4 social commentary drama, ‘Walter’, about a man with learning difficulties. ‘Walter Now’ was originally broadcast as the ‘Saturday Play’ on 10 January 2009 and repeated on 25 September 2010. In November 1982, Channel 4 launched with David Cook’s ‘Walter’. Now, more than 25 years later, this award-winning writer brings us up to date with Walter's life and Sir Ian McKellen recreates his extraordinary performance. Walter is now a pensioner. Following the death of his mother, Walter spent many years living in a psychiatric hospital. When that was closed down he moved to hostel accommodation where he is isolated and lonely. When his support worker hears of a house share with three others, he suggests Walter. But Walter is twice the age of the rest. Will they accept him? Will he cope with independent living? Will they integrate with the community around them? Also stars Becky Hindley, Malcolm Tierney, Anna-Marie Heslop, Robert Londsdale, Gunnar Cauthery, Edmund Davies, Jill Cardo and Ceallach Spellman. Directed by Claire Grove.