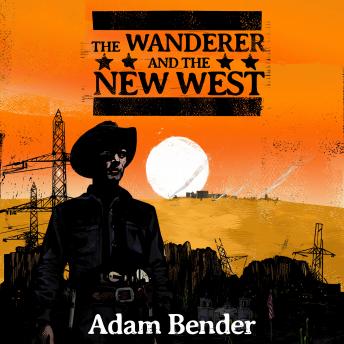 The Wanderer and the New West

Listen to the Dystopian Western named to Kirkus Reviews' Best Books of 2018
A rogue vigilante seeks redemption in a lawless, near-future America that fully protects the rights of armed citizens to stand their ground against mass shooters and motorcycle gangs. When a marksman known as the Wanderer opens war against injustice in the state of Arizona, his violent actions attract the attention of journalist Rosa Veras, writer of a subversive blog about America's return to the Wild West.

Named to Kirkus Reviews' Best Books of 2018, The Wanderer and the New West won gold for Dystopia in the 2018 Readers' Favorite Awards and best Western Fiction in the 2018 National Indie Excellence Awards.

'A dystopian novel about an America ruled by gangs and gun manufacturers and about the brave few who are willing to fight them both ... A tight, thoughtful work that has much to offer readers on both sides of the gun control debate.' -- Kirkus Reviews (Starred)

'Bender's prose and ability to weave poignancy and humor throughout the story elevates his novel above others in the genre.' -- Publishers Weekly BookLife Prize

"A dystopian view of an America that many may well see as a path the country is already headed down ... I couldn't put this book down and read it quickly and easily.' - Grant Leishman for Readers' Favorite (5 Stars)

'The setting is absorbing, pulling in the reader like a captivating movie, and I couldn't help getting the same feeling I get when I watch the series 'Arrow.' It won't be surprising if this story ends up on screen.' -- Arya Fomonyuy for Readers' Favorite (5 Stars)

'The action is continuous and horrific ... revealing vistas of the future and especially the dangerous paths poor and greed based politics are forcing mankind to follow.' -- Deepak Menon for Readers' Favorite (5 Stars)

'Brutally honest and scarily real, The Wanderer and the New West is a brilliant novel. Raw and gritty, this novel lays down the bare truth without sugar coating anything.' -- Rabia Tanveer for Readers' Favorite (5 Stars)

'Bender creates vivid characters in the plot that will resonate with any reader ... The author helped me visualize the impact of lawlessness on the media, technology and any nation as a whole.' -- Edith Wairimu for Readers' Favorite (5 Stars)

The Wanderer and the New West is a brand-new, stand-alone novel by Adam Bender, an award-winning tech journalist and critically acclaimed author of the We, The Watched dystopian sci-fi series about government surveillance.

From the back cover:

'We live in a time of great individual freedoms. No government can tell us how to live our lives because we are free. In America, we are above the law.

We live in a time of great violence. Rob a bank, steal from a neighbor, murder a man who looks at you funny . . . but do it at your own peril. The people are watching, and we know the difference between right and wrong. Stand your ground, but beware: in America, we make our own justice.

This is THE NEW WEST.

These pages chronicle a people unbound by law - their actions and the consequences. We pr

Wanderer and the New West