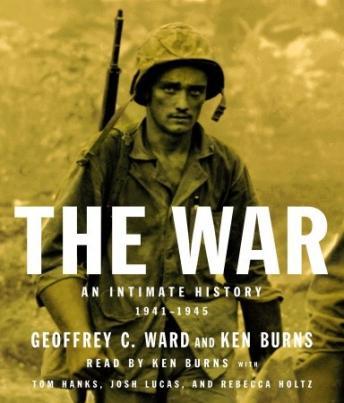 The companion volume to the magnificent seven-part PBS series

The individuals featured in this audiobook are not those of historians or scholars. They are ordinary men and women who experienced–and helped to win–the most devastating war in history, in which between 50 and 60 million lives were lost.

Focusing on the citizens of four towns–Luverne, Minnesota; Sacramento, California; Waterbury, Connecticut; Mobile, Alabama–The War follows more than forty people from 1941 to 1945. Woven largely from their memories, the compelling, unflinching narrative unfolds month by bloody month, with the outcome always in doubt. The iconic events are here, but we also move among prisoners of war, defense workers and schoolchildren, and families who struggled simply to stay together.

An intimate, profoundly affecting chronicle of the war that shaped our world, The War captures the American experience of World War II through the words and deeds, thoughts and feelings of those who made history on the battlefields and on the home front.