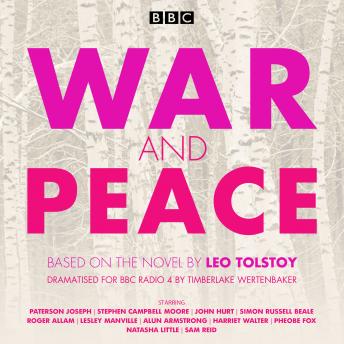 One of the greatest novels of all time, War and Peace explores historical, social, ethical and religious issues on a scale never before attempted in fiction, and reflects the panorama of life at every level of Russian society during the 19th Century.

Adapted for radio by Timberlake Wertenbaker, this riveting, wide-ranging drama follows the fortunes of four Russian aristocratic families during the Napoleonic War. Told in flashback over ten episodes, it moves from fashionable society soirées in St Petersburg and Moscow to the battlefields of Austerlitz and Borodino, as protagonists Pierre, Natasha, Marya and Nikolai describe to their children the events that shaped their lives and those of every Russian who lived through this turbulent time.